Beware of the New Soda In Disguise

Thirsty?  Find yourself reaching for a “healthy” juice or vitamin water?  Nothing hydrates you better than plain ol’ water with nothing added to it at all!

Are You Overly Acidic?

Find it difficult to concentrate?  Suffer from recurrent viral infections, allergies and respiratory problems?  Fatigue quickly and recover slowly?  Do you feel pessimistic?  Notice a loss of enthusiasm, joy and motivation?  Experience chronic muscle stiffness, soreness or pain?  Have recurring headaches?  Notice areas of inflamed and itchy skin?  Have you been told you have brittle, or thinning bones?  Noticed a change in your perspiration and body odours (towards one that is more rancid)?

We live in a society that is constantly on the go and will unquestioningly pop that prescription “cure-all” magic pill.  Imagine for a moment however, if you could roll back the clock prior to your diagnosis of hypertension, diabetes, chronic kidney disease, heart disease, recurrent headaches, premenstrual dysphoria – and you had someone tell you your prescription could be wholesome food and a healthy lifestyle!  What would you do with that information?

I present to you the original happy meal –

The primary force creating, or further contributing to many of the above-listed common illnesses is directly linked to your…drum roll please…you guessed it, diet!  As a Naturopathic Doctor, the vast majority of patients who walk in through our doors are persons with less-than-optimal health and are those who also have an acidic body terrain.

Fortunately, there is much you can do to turn an unhealthy acidic environment into a health-promoting alkaline environment. In fact, the most important step you can take in creating an ideal acid-alkaline balance in your body is to take control of your diet by making smart food choices.

Hind sight is always 20/20. What happens if you had the key to unlocking health and vitality, without the negative side-effects of pharmaceuticals, which consequently also require additional pharmaceuticals to offset your original prescription’s side effects? Would you unlock the door to your potential health and well-being?  Incorporation of an alkaline diet is not just a buzz word used by Naturopathic Doctors.  Ask your Naturopathic Doctor how you can achieve more of an alkaline body balance!

I just watched an absolutely mind-blowing movie found on YouTube called The Future of Food.  This movie comments on gene patenting and the introduction of genetically-modified foods (perhaps more correctly so, its integration), into our food chain.

Epigenetics is the study of heritable alterations in gene expression caused by mechanisms other than changes in DNA sequence.  To relate this idea back to the discussion of our agriculture, while organic produce may be loosely “indistinguishable” from GMO produce at quick glance, there are undeniable differences between it and our organic produce and this is seen in subsequent generations of genetically-modified plants (it may look like “regular” crop and produce seeds, but seeds from these genetically-modified plants are not viable and therefore unable to produce future crop).

The food we are consuming is often over-looked as playing a contributory role in the progression of disease.  Remember, the body is amazing at being able to take a high-level of “abuse” before it reaches a tipping point, whereby illness manifests.  Just because you are able to buy it off the store shelf, does not mean it is a food you should be eating.  The fact of the matter is that we do not know what the long-term effects genetically-modified foods will have on our bodies, on our health or the health of our families.  Unfortunately, we cannot forecast what unintended consequences may come from these food choices. 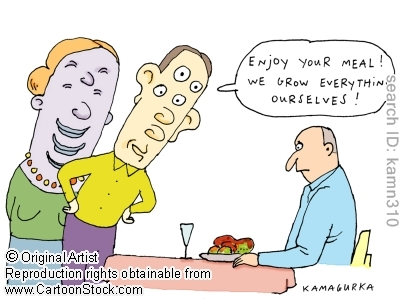 My advice: choose quality foods over quantity.  Purchase the best quality food you are able, opting for a food that is not genetically-modified (as indicated by its SKU code), and is local and organic.  You owe it to yourself to consider the effect GMOs will have on human epigenetics and epigenetic inheritance, which means that what you eat can affect the health and wellness of your grandchildren, great grandchildren and great great grandchildren.  A major advantage of choosing locally-produced crop is that it is harvested when it is at its peak nutritive value.  According to this movie, local food travels an average of 50 miles (80 km), whereas food in the average supermarket is said to travel an average of 1500 miles (2414 km).  To give you a better appreciation of what that means, the longest east-west distance of Toronto is approximately 43 km, and for Ontario it is 1690 km.  The bottom line – the nutritional content of your food decreases the further your food has to travel before it reaches the produce isle at your grocery store and subsequently, your family’s dinner table.